Second quarter is in full swing, you have about a million projects on your plate, and all anyone at the office can talk about is how the Night King looks like someone gave Darth Maul a Dentyne Ice. Let’s hope that really is all they talk about though, because you aren’t caught up on HBO’s Game of Thrones! Either you’ve been too busy juggling projects to watch last week’s amazing episode or you’re still five seasons behind. The point is that there’s one thing you must avoid as if your life depends on it, the one thing Avengers: Endgame’s producers went to great lengths to keep mum, the coolest looking aerodynamic modification you can make to your car: SPOILERS.

If you’re looking for a way to successfully avoid spoilers at the office, you’ve come to the Last Hearth. Welcome to the one place on the internet (and in the Seven Kingdoms) where we not only detest spoilers, we also will actively coach you on evading them. So stop praying to the old gods, and the new. Don’t lock up your ravens just yet. And don’t worry about holding the door. The night is dark and full of terrors, and we got your back on this one. 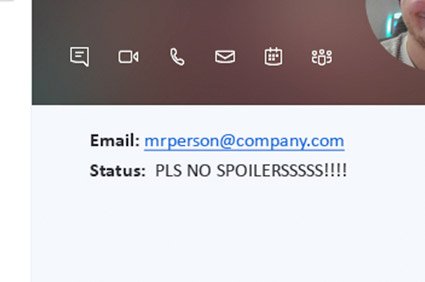 It’s one of the show’s most popular quotes. Characters and fans alike will whisper this line to one another as a sign of a shared secret. For the former, it comes from the ancient language of Valyrian, spoken by the Targaryens. For the latter, it just means they’re both Thrones-heads (Game-heads? GoT-heads? Wolf-heads?). It’s important for our purposes that it means “all men must die” as an ominous warning, because you can set it as your Lync, Slack, or G-chat away message to ward off spoilers! You could also plant this nugget in your email signature or just sneak it into the company letterhead. Like a well-placed piece of foreshadowing, your colleagues will get the hint sooner or later and remember to ix-nay on the oilers-spay. 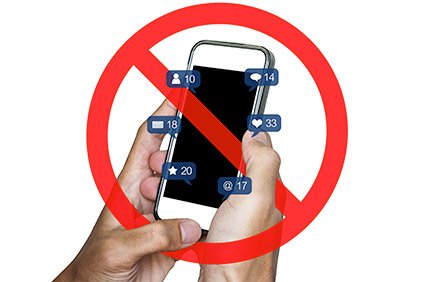 We know the quote’s not from Game of Thrones…but ravens sure are! These talkative birds are the information super highway for castles across Westeros. Maesters send them out with vital messages either from one fortress to another, or from the battlefield back towards home. So, if Facebook, Twitter, Instagram, Pinterest, Worldstar, and Snapchat are your form of ravens, you’ll want to muzzle their beaks and keep them caged. In other words, stay off social media for a few days! Weeks, even! This is the number one source for all things Game of Thrones. Keep those floodgates shut. “But, I don’t know what I’ll do if I can’t browse Facebook,” you say. Then this is the perfect opportunity to begin (re)reading the Song of Ice and Fire books. Or rewatching the series from the very first season. Or burying your nose in all of that work you need to get done. Or maybe you will save up enough extra minutes staying off social media to watch the latest episode. In most workplaces, where social networking sites are inaccessible, this should be an easy one! 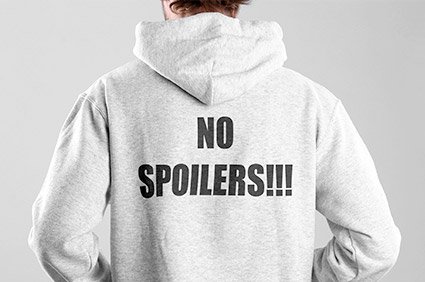 Have you ever worn a rabbit’s foot around your neck or a shamrock keychain on your keyring? Have you hung fuzzy dice from your rearview mirror? Or a horseshoe on your foot? We all have good luck charms or items which make us feel more secure when near. Some of these items have real-world utility though. Like wearing a sword on your back to scare away would-be thieves. Or wearing a waitress’s face to sneak into a banquet hall and poison the entire Frey family with bad pie. We don’t condone identity theft, so the next best way to protect yourself from spoilers is wearing a sign. Keep it simple, a basic message like, “I am waiting until my husband gets back home from his business trip to watch the GoT season finale, so if any of you spoils the show for me, I will steal a waitress’s face and poison all 88 of your relatives’ slices of pie at a banquet hall.” Wearing a crude paper sign with this message on it might look a bit weird though. You’re better off getting your message printed on a hoodie you can wear to the office every day. 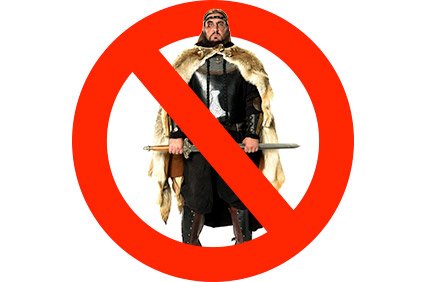 The Red Wedding, and Other Parties to Avoid

We know that this one might seem impossible, but do your best and try not to host a Game of Thrones themed party at the office. Or anywhere for that matter. That means no headless Ned Stark dummies, no bringing your daughter to work day with her dressed as Khalessi, and no baking lamprey pie for the whole office. This will come as quite a shock – GoT parties are a hotbed for theories and spoiler discussion, sharing of leaked footage, and reminiscing over the good old days (aka, last week’s episode). Just as Robb Stark and his dear old mum shouldn’t have accepted an invitation to Edmure Tully’s wedding to Roslin Frey, you might want to RSVP “Hell, no!” to any mysterious invites you get until you’ve polished off the season. You never know when all of the violinists will stop playing drinking songs and suddenly begin playing a ballad they wrote about who dies in the series finale. 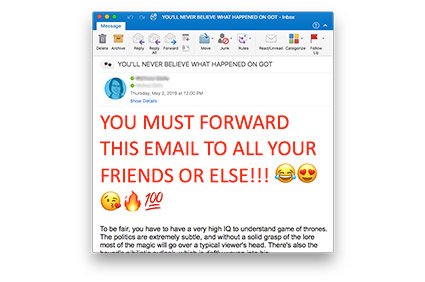 One of Varys’s little birds told me

Just like Sherlock Holmes before him, Game of Thrones’s Lord Varys relies on a network of street urchins for his valuable political dirt. He calls them his little birds. While you’re cannily dodging daily GoT parties, in order to avoid the little bird network, you might want to just start working from home. Otherwise you’ll find yourself plugging your ears every time you go to the restroom, bringing a 24-pack of bottled water just to avoid that water cooler talk, saying no to important client meetings in case one of them is an ambush. In fact, once you’ve started working from home, it’s safer to turn off your computer altogether and switch to snail mail. Have the post office put a moratorium on post cards (what I like to call the “open-faced sandwich of letters”). Then ask a postal worker you trust to screen your mail for you. 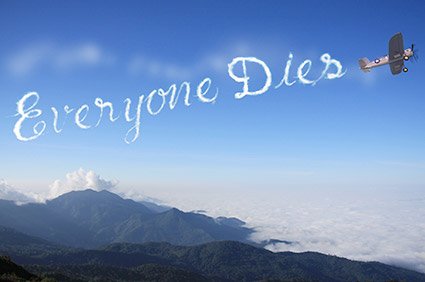 When bad news comes down the pike via raven, characters in Westeros often murmur, “dark wings, dark words.” The Three-Eyed-Raven – who used to be Bran Stark before he became a paraplegic, suffered a siege in his castle, escaped North of the wall, outran some zombies, was trained by an old tree, and then traveled back in time to save his own life – sees all, all the time. Now, that’s what you don’t want to do. You’re going to want to cast your gaze downward and shield your eyes when leaving the house. Don’t look up! There may be Game of Thrones skywriting up there! Look away from neon venue signs that may have been made to promote a GoT trivia night at a local pub and accidentally contain dangerous information. Don’t buy any promotional posters. And whatever you do, watch out for graffiti. Those scamps and rapscallions (some of whom may even be Varys’s little birds) are surely still tagging “Dumbledore dies on page 596” all over city hall. So don’t keep your eyes peeled – instead keep them shut tight! 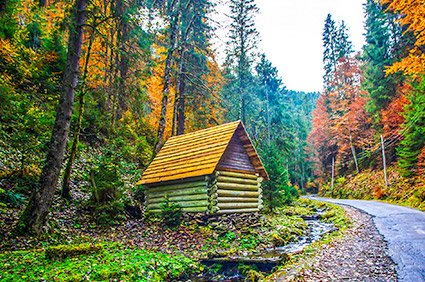 Become the King Beyond the Wall

The wildlings are those poor souls who were left on the wrong side of the border when Westeros’s great, big wall went up. They live off the land, hunt for their food, drink melted snow, and don’t have cable (let alone HBO). Their leader is Mance Rayder, the king behind the wall. You say you really want to get to the finale without any spoilers!? Then, get off the grid. Cut your cords. Compost. Don’t tell anyone where you’re going except for other people who haven’t seen the finale. Change your name. Change your shirt once in a while too, because it’ll start to stink. Start watching Reigns instead. Pretty soon, you will be leading other spoiler-free fans to victory!

Nobody wants their favorite show ruined for them. But what’s even worse than unwanted information – misplaced information. The typical manager wastes 150 hours a year (almost an entire month), searching for lost information. And you thought the Night King had it bad looking for Bran! The good news is that once you watch the finale, get back on the grid, and convince them to give you your job back – you’ll have learned the value of data. And you’ll have learned how best to protect it (hint: don’t use it as bait in the godswood). Computhink offers business solutions for organizing, retrieving, sharing, and securing your company’s precious documents. So, the next time someone threatens your viewing integrity with spoilers, you can be confident that the paperwork you filed transferring them to the Northern branch will make it securely through the proper workflow. A Lannister always pays their debts…