Are you looking for a solution that will complement your business environment by providing integrated document and content management? Even if you may already have the standard SharePoint offering, can you easily configure it to provide the Document Management functionality you need?  Is SharePoint really a low cost solution that can be easily integrated with your other mission critical applications with the feature functionality needed?

Using the term Microsoft SharePoint is like using the term Microsoft Office: it refers to several aspects of web-based collaborative solutions. Microsoft foundation is the core technology engine of MS SharePoint, providing very basic document management and team collaboration tools. It is currently free as long as you are utilizing Windows Server. Microsoft is not planning to release a free SharePoint Foundation 2016. They are currently considering different options for existing SharePoint Foundation customers. If you want extended features such as Enterprise search, personalization, ECM etc. then you have to purchase Microsoft Office SharePoint Server (MOSS).  Microsoft currently has three tiers of pricing for SharePoint 2013 – it’s also resold through a cloud model by many third-party vendors and the next on-premise release is SharePoint 2016, which will have increased hybrid cloud integration

When turning to public opinion and IT professionals for guidance and answers, the reviews available provide a wide spectrum of experiences and passionate responses. Although SharePoint has evolved a long way from the early 2001 version, it remains in essence a web application platform, not a product. SharePoint isn’t a ready-made solution – it’s a dissonant collection of tools.

The general consensus of those voicing their grievances is that SharePoint does everything in mediocrity, has a host of quirks and issues, and “performs like a milk van on a steep slope and makes most developers moan.” It has huge limitations out of the box, many nuances and bugs within the API, and there are so many different areas and tools that need to be learned and navigated that it makes SharePoint custom development difficult both to learn and debug.

Many developers have become very frustrated with SharePoint, both in earlier versions and even with the most recent updates: “Although my company is a big advocate of SharePoint and I’m the main SharePoint developer for my company, I hate it with a passion and try to steer clear of it and recommend against it as much as possible,” says Bobby of Eldblom. “It’s much faster for me both in the short and long run to create custom applications than dive into that mess of a platform.”

On his professional blog, Nate Balcom writes, “Speaking from a developers stand point it’s entirely outdated code. It’s a nightmare to work with. I would never put it on a resume that I’ve used/ coded SharePoint for so many reasons. I would never want anyone to see what I had created in SharePoint. I wouldn’t want to perpetuate the use of this software. It would not at all be an arrow in my coding quiver, but most of all I wouldn’t ever want to give the impression that I would like to work with this abomination in the future”

“I have taken part in the development of three large customized SharePoint solutions and I can only say that SharePoint makes all customization and development at least twice as slow and hard to deploy, hard to maintain, hard to operate, hard to log and fault find, and generally a pain,” Johan Arbenter says.

Currently there are over 290,000 posts on Google detailing reasons why as a business solution SharePoint is a real problem; it fails to meet the requirements of basic DM or ECM feature functionality and performance. These include everything from the frustrating interface to the lack of features, to the absence of version control, to the countless hours wasted digging around for files. In fact, plenty of users admit to secretly reverting back to email for file sharing and collaboration in general.

Giant enterprise companies and government agencies are paying massive amounts of money to deploy SharePoint in the hopes that their employees will actually use it. But the exact opposite seems to be true. And most IT departments, CIOs, and check-cutting executives have no idea what’s really going on—down on the ground level.

Small to medium size businesses are likewise implementing SharePoint in the belief that they can minimize costs, only to find out that the ongoing costs, especially when integrating or adding basic document management functionality, send their expenditures skyrocketing.  So let’s review a cross-section of the reoccurring complaints and criticisms:

No technology in the world is going to solve problems for you; rather, you apply the tool or technology to aid you in the solution. SharePoint doesn’t conform to World Wide Web Consortium (W3C) standards, so if that’s an issue you’ll have to wait or do a lot of customization. Yeah, this is a problem and is one of the biggest problems with SharePoint rendering, but it is generally not considered a result of HTML vs SomethingElse. Just bad rendering by Microsoft.

As for the upcoming latest version, SharePoint 2016, this isn’t due to customers until the second quarter of this year. But Microsoft used its recent Ignite conference to talk a bit about what users can expect as the product moves from preview to final release over the next few months. A first test build of SharePoint Server 2016 will be out this summer, followed by a full beta in the fourth quarter of this year. As Microsoft execs speaking at Ignite explained, that product is based on a snapshot of SharePoint Online that’s part of Office 365, which Microsoft is turning into an on-premise release. The “kernel” of both this online snapshot and SharePoint 2016 itself is SharePoint Server 2013. That means SharePoint 2016 will be focused, like its predecessor, on managing files, content management, sites, and portals.

Though it will run on top of Windows Server 2012 R2 and Windows Server 2016, SharePoint 2016 will include support for what Microsoft calls “cloud-accelerated experiences,” meaning new hybrid scenarios. Microsoft has been talking up the “hybridization” of SharePoint and other new servers for a while, but only after plowing through a bunch of the SharePoint sessions from Ignite. Instead of trying to push all SharePoint users and all SharePoint workloads to the cloud, Microsoft is acknowledging there are some reasons (compliance among them) that not all data can or should be in SharePoint Online. That said, Microsoft wants to enable its SharePoint users to get at their data wherever it’s stored.

So when considering a SharePoint solution, review the following: 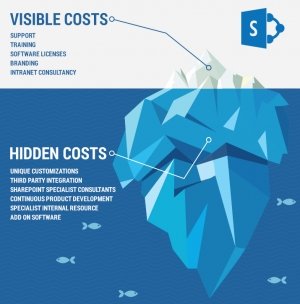 We don’t want to bash the square peg here, we’re simply saying that if you have square holes and are ready to put in time and money to get it right, then use SharePoint. If you want something out of the box with a full array of Document Management and Enterprise Content Management features, then don’t try to use a square peg just because it would appear on face value to be free.

For most of the adverse comments we found, it’s usually because SharePoint has been deployed in situations where it was totally excessive, and it usually caused more problems than it solved.  The general comment we hear again and again is that, if you have a file that you don’t ever want anyone to find, just upload it SharePoint!