When it comes to Information Technology, saying most of us are in the dark would be a bit of an understatement. We’re blind, blindfolded, and locked in a sealed shipping container at the bottom of the Marianas Trench with nary a match to light our way out.

But even the darkest place on Earth has some bioluminescent friends for us. Enter the IT guys.

Have you tried turning it off and on again?

No, not those IT guys. Your IT guys! The folks who fix your computer when you accidentally download about 37 viruses from the same online game website. They’re the crowd who ordered you a new keyboard when you spilled a caramel macchiato on your old one. You may see them at the watercooler as they glare at you: this is the fourth day in a row you’ve forgotten your 6-digit password.

Let’s break down that barrier between the IT department and everyone else. We’ve got a few hot tech terms that will help you, the average Jane or Joe Business, impress your IT team so much, they’ll be asking you for computer help. 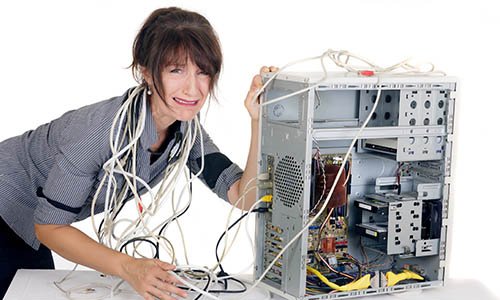 Ok, maybe that’s a bit of a stretch…

When you hear this term in conversation, while talking to a technician, or in a commercial, what do you think of? Some whimsical glowing nebula in space holding all your photos from Spring Break 2005? You’ve been misled a tad. The cloud isn’t a magical gas that floats all around us. 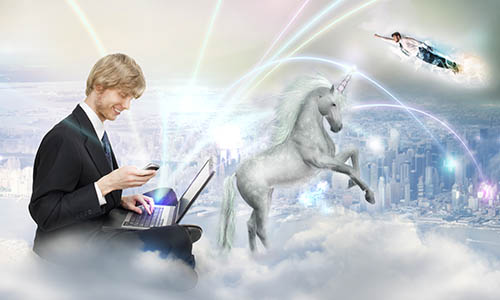 This isn’t the cloud, it’s your brain on drugs.

Most of the time, when less-than-tech-savvy folks think of computer viruses, they picture something malicious and ghastly, like this sucker:

While viruses did get their name from the similarity to actual pathogens, this oversimplification can be damaging to your computer’s health. A virus is a malware program designed to be activated or installed inadvertently by you, after which it replicates and spreads throughout your system. You can prevent viruses from getting in by installing legit antivirus software.

You also are going to want to avoid opening emails from people/companies you don’t know, especially if they have attachments. DO NOT OPEN THOSE ATTACHMENTS UNDER PENALTY OF LAW. And avoid shady websites. Good anti-virus software will help you browse safely, but come on, do your part.

This has been a hot-button issue lately. Everyone is talking about back doors. And they’re not talking about the ones that lead to the backyard.

Honey…I’m worried about our cybersecurity.

Think of when you log into a piece of software or a website. You put in your username and password, and then you gain access. That is a front door entry point. Back doors are just what they sound like. They bypass typical security measures to access the program, usually to be able to view or edit the code or access stored data.

Sometimes back doors are great, because they help you recover your password, like hiding a key under a potted plant. But when you go leaving keys under your lawn art, anyone can get in. The biggest issue with backdoors? Well, hackers can get in through them for one. What else? You guessed it: VIRUSES! Hey, we were just talking about them! 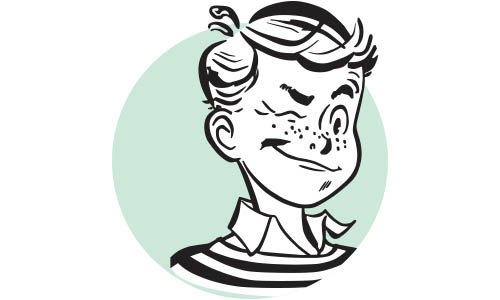 If you saw the word above and thought “blankware” was some new computer term you’d have to learn, this whole article was meant for you. Computers have three basic types of “ware.” Hardware is easy – that’s the computer itself, the case, the motherboard, the monitor, even the mouse! They’re all hardware because they’re concrete objects, the same way a carpenter uses hardware. The physical pieces that make up a computer.

The firmware, also called an “Operating System” (or OS), is the environment in which you can run programs. Your computer’s OS is probably OS X or Windows, but other popular ones for digital gadgets include Linux, Android, and iOS. The firmware is meant to be installed once and then stick with the machine through its life. Firmware can get updates or fixes, but you’re generally not going to be frequently wiping your computer of its firmware. It stays firmly in place.

Software is easy – programs that can easily be installed, uninstalled, modified, and that can affect one another. Almost all of your time on a computer is spent interacting with software. So, that means Microsoft Word, Google Chrome, Safari, Angry Birds, Contentverse, Salesforce, etc.

Now, when someone brings up any sort of something-ware, you’ll have the 411.

The first firewalls were actually used to contain fires. Pretty cool, eh gang? Well, these practical construction standards have been digitized. Firewalls in computing are like checkpoints or barriers between your internal network (or intranet) and an external network (or the external network, aka The Internet). These puppies monitor all of the traffic passing through the barrier and watch for red flags.

He’s going to steal all our RAM!

This image is from HackerCon 2015. I’m dead serious.

You can think of them as a security system for your company’s private network, website, or server.

Here comes a toughie – what is the difference between a router and a modem? Don’t know? Neither does anyone else. Don’t worry.

Internet Service Providers (ISPs), like AT&T, Comcast, Cox, or the up-and-comer Google Fiber, grant access to the internet via cable or DSL ports. Your modem plugs into the port and thus connects to the internet. The router connects to the modem and distributes that internet connection among devices, usually over wifi. Like the cloud, wifi isn’t a floating mystical force; it’s just radio waves wirelessly connecting your computer to a Local Area Network, which in turn is connected to the internet. The router does this. It’s technically a little barebones computer, so you can even log into it and change security settings (Don’t try this at home, kids).

Combined modem/routers also exist, which simply are routers that can plug directly into the wall without an extra step. Neat-o.

Are there too many file types to remember? Just when you were starting to understand the difference between a JPEG and a PNG, now we throw this curveball at you.

Don’t sweat it – .exe and zip files are very different, so you won’t get them confused.

.ZIP is an archive file format. When you zip a file, your native zip application finds redundant patterns in the file’s code, makes a key for them, and then replaces the redundancies with placeholders from the key. It’s the same thing we do when we use pronouns instead of saying people’s full names every time we mention them. It compresses our sentence and saves us breath we can use to office gossip about said people. I love office gossip, so I especially love .ZIP files!

.exe stands for “executable”, and these files are really just programs. As soon as you open it, that action is telling the operating system (shout out to the firmware) to run that file’s contents as a program. The contents is code, of course. The most common times you’ll see .exe files is as setup files to install a program. After that software is installed, though, it dresses itself up a bit more so that its .exe extension isn’t dangling out there like errant curls from a carefully sculpted hairdo. That would be embarrassing.

This modern manscaper is about two strong gusts away from a fashion emergency.

The reason I lumped this odd couple together is because .exe and .ZIP files are two of the most likely to contain viruses when coming from an unknown source. So, when a friendly offer for free leads shows up in your inbox, DON’T touch that file!

You’ve heard of Intel, right? Intel Inside and all that? You’re nodding your head with a faraway look in your eyes. Intel produces microprocessors, also known as a Computer Processing Unit (CPU). This is the itty bitty part of your computer that actually thinks. It does the number crunching. It turns raw data into something you can actually read, observe, and interact with. Sure, it needs a bunch of other stuff to do that, like power, RAM, a video card, and a monitor, but the CPU is the brain that does the heavy lifting. And it gets really hot doing it. That’s what causes the cooling fan in your PC to freak out when you’re doing too many things at once.

That reminds me: don’t do too many things at once. This includes having 30 million tabs open, or trying to run every single application in the Microsoft Office suite while you watch two webinars and attempt to chew gum at the same time. That won’t end pretty. Your CPU is stress tested, but consistent pressure to perform may cause it to break down unexpectedly.

CPUs aren’t the only ones in need of stress-testing.

Instructions for your processor (see above) are written in binary, the secret language robots use to plot against us. Just kidding (but, for real). 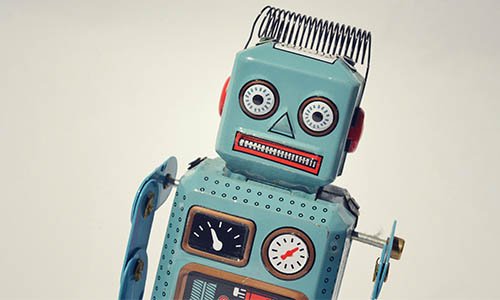 All of the data that goes into your processor and comes out as programs and videos on your screen starts in the binary system. Every digit in the binary computer language is a bit. Every eight bits is a byte, and that is the smallest way to make numbers and letters in binary code. One kilobyte (KB) is 1024 bytes, and one megabyte (MB) is 1024 kilobytes. Which makes one gigabyte (GB) 1024 megabytes, and so on into terabytes and petabytes.

Not too long ago, anything measured in KB was a lot of data. Most computers coming out these days have 500 GB of storage space as a bare minimum. You can buy terabyte hard drives for lunch money at your local electronics store, and petabyte computers aren’t even that uncommon. If our ancestors travelled to the future and saw all of this insane storage capacity, it would probably make them faint! Well, that and the robot overlords.

You know how sometimes you plug in a new device, and it just…works? That’s called Plug and Play, and it’s awesome. Any device you hook up to your computer needs to have a small program that communicates with your PC or Mac. This program is called a device driver. Without it, the new hardware and your firmware would be lost in translation.

Plug and Play means that the device driver installs automatically, acts quickly, and requires no reconfiguration to run smoothly. Sometimes when your keyboard, mouse, or Extreme 3D Pro Joystick (shhh, don’t tell the boss) are acting up, it means you need a new driver that communicates with your OS better. Check the manufacturer’s website. Usually, drivers will be updated regularly and available for download for free.

Look at how impressed your IT staff is!

It doesn’t take a computer scientist to bring an office together, but it sure helps to have one. Don’t forget – your Information Technology Education doesn’t stop here. When you show off your new vocabulary to the IT people in the office, they’ll be so excited that they’ll probably offer you a job in their department. How lucky!

What’s more, the way to an IT staff’s heart is through their software, so why not offer them an ECM solution that will make their job easier and save the company a ton of dough in the long run!